A dear friend of mine who paints and writes, teaches and leads workshops to teach teachers how to be creative, told me one time that she does not think of herself as an artist. “I am not an artist, I make things,” she said.

This simple statement changed my life. It gave me freedom and permission to enjoy the creative process without so much self-critical judgment about whether it was good or not.

The creative impulse is inherently ours. I believe that our essence is creative and we are most happy when we express ourselves.

When we think of ourselves as “creative,” we may make art or write or decorate a house or garden or cook. If we think, “I am not creative,” we feel restless or may think we have Attention Deficit Disorder. We have lots of ideas, sometimes so many we don’t know where to start. We might try to stifle the creative urge by eating, sleeping, drinking or procrastinating.

Why would anyone want to stifle the creative urge? It seems unnatural to suppress creativity. I think we learn to do that. Children may be taught to “get rid of” excess energy or be told that they can’t draw or paint or sing. As adults we often operate from beliefs we adopted long ago. One experience of feeling ashamed for singing off key or being too loud or not following instructions can spark a lifelong belief in not being creative.

What if, for a month, you decided “I am creative”? What if every day you did something creative without any judgement about whether it was good enough? Try listing all of the things you like to make. Maybe you use your hands or your pen or your voice or your body. Do one of these things every day. See how you feel!

At different times in my life I have allowed myself to be free to be create. At other times, I have killed my creativity with harsh judgments. Recently I decided to do one creative thing (at least) each day without regard to whether it was good enough. I discovered that many of the ways I like to create are useful. Somewhere I had come to believe that being creative and being useful were incompatible.

So I was judging myself as being uncreative when, in fact, in one week I expressed my creativity in these ways:

•  making an altar by covering a plastic tub with fabric

•  decorating a work area with plants

I was reminded of a class I took in college when I was studying Women’s Studies. Called Women’s Imagination, the question posed in the class was “Why are there no great women artists?” This was in 1978, when most of the artists who were known in the world of fine art were men.

I learned in the class that there were painters and writers who used male pseudonyms so that their work would be accepted in society, but there was also a condition in which women expressed their creativity through objects that were consumed rather than hanging in art galleries. So in many periods of history, women’s art took the form of embroidered tablecloths or handmade clothes or delicious meals. Because these were used and often used up, their creators were not recognized or acknowledged.

The Mayans describe time by saying that Time is Art. In Western society we have mutated the idea of time to be Time is Money. When we value time in dollars, we may come to devalue creative activity for the sake of creating, for the pure joy of putting things together in a new way.

About a year ago, I noticed a series of nighttime dreams in which time was an issue. In most of these dreams I was late for something, or I noticed a clock and became aware that the time had passed for something I was supposed to do. I wondered why the clock or issue of time was so prominent. In all of these dreams, I recognized the feeling of having missed out on something.

Reflecting upon my waking life, I discovered that these dreams always accompanied a feeling when awake that I was “missing the boat,” that there was something I was supposed to be accomplishing or doing that I was not doing. It was always unpleasant, with a kind of gnawing feeling in the area of my solar plexus.

When I am creating, I never have this feeling of time running out. There is a feeling of joy and fulfillment. For me, I especially enjoy creativity when I am making a gift. Something about sharing my self-expression that brings me fulfillment. Not too long ago, someone posted a challenge on Facebook to offer a creative surprise to the first five people who responded. I decided to participate in it and found myself grateful for the “excuse” to make something for other people.

I made different creative surprises for the five people who responded: a personalized bookmark for one, a mandala for another, a poem for another, a door hanger for a mother who meditates with an image of a meditator (so her kids would know when she wanted to be left alone for her spiritual practice) and my favorite, a doll. 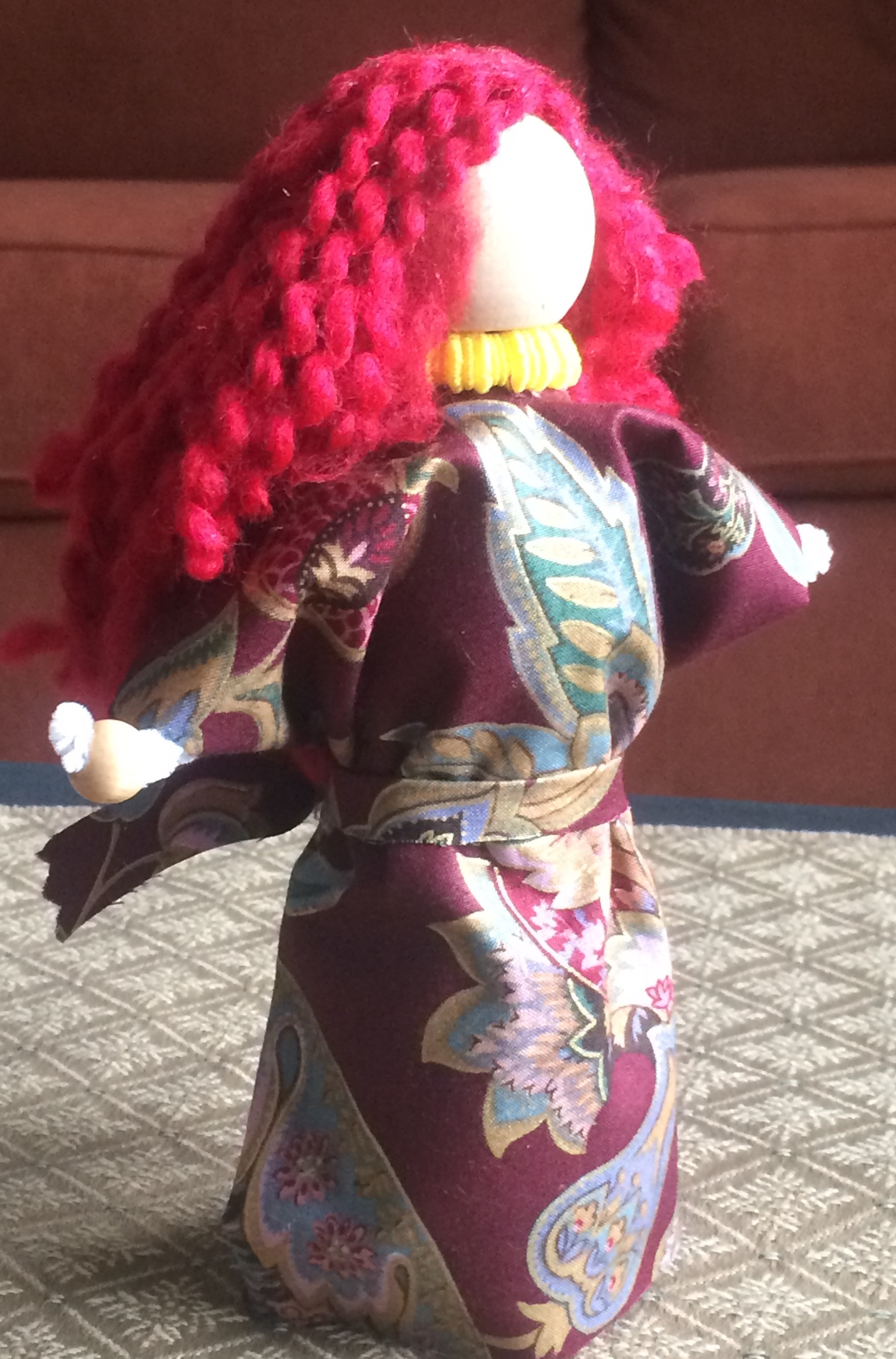 For some reason, the idea of the doll came to me immediately when the fifth woman responded. I visualized what I wanted the doll to look like and how I would make her. I had an empty shampoo bottle that was somewhat hourglass shaped. I thought it would make a perfect body. I wanted to make the doll from “found objects” so I had my eye out for yarn for the hair, fabric for the dress, a children’s hair tie for the collar of the dress, and pipe cleaner arms. The only thing I bought was a wooden ball for the head and glue to put her together.

Thinking about the doll and looking for the objects to make it brought me great delight. I was not sure whether my friend would appreciate her as much as I did but the joy of making it infused the doll and she received my love and creativity along with the thing itself.

Making that doll also reminded me of the final project that was part of the Women’s Imagination class. Our final assignment was open-ended: to do a creative project. I had no idea what to do. As I was pondering this, I browsed in a bookstore with my older sister. I was looking through an illustrated book of dollhouses, poring over the details of the tiny furniture.

“Why don’t you make a dollhouse for your creative project?” she suggested, “You’ve always loved them.”

What a great idea! This is why I love people; they can stimulate you to think in ways you might not otherwise think. She was right, as a child, I had loved dollhouses. Some of the first dreams I remember are those of very intricate and detailed dollhouses. Although I had one, it had molded plastic furniture. I longed for furniture that actually worked, with drawers that opened and closed, lights that turned on, stairs that a doll could climb.

I decided to do it. I found three sturdy cardboard boxes for the three rooms. I figured I could make a living room, dining room, and bedroom. As soon as I thought about it, I immediately started to “see” in things in my environment a new use for them. I bought some balsa wood at a craft store and used it to cover wooden boxes. Three matchboxes stacked on top of one another, covered in balsa wood with tiny beads glued to the front made a three-drawer dresser with drawers that opened and closed.

I had a microscope when I was in junior high school and still had a box of microscope slides I had never used. I saw those slides, and immediately could see in them two tiny glass-topped coffee tables. So I took some square beads, painted them black, and glued them to the bottom of the slides. Voila! Two glass-topped coffee tables. That set the tone of the living room, which had to be a contemporary design.

More discoveries produced little objects. An empty top to a shampoo bottle made the perfect base for a leather button, which made a footstool. I even sprouted a live plant from a carrot placed in water and planted it in another bottle top, then used string to make it into a hanging planter.

I became so enthused with the creative process I could hardly sleep. Everywhere I looked I saw something that could be made into a little piece of furniture: the lid of an orange juice can became a serving tray, covered with a plastic coated playing card. I cut other cards to make matching placemats to go with the serving tray.

My friends were astounded that I spent my entire spring break, at my mother’s home in New York, staying up most of the night making the dollhouse furniture. “Why are you spending so much time on it?” they wondered. It was a pass-fail class so I didn’t need a grade.

I was making it not for the grade but for the joy of creating. The class assignment gave me a purpose for doing the project. For years afterwards I carried it with me throughout many moves until unfortunately it was ruined in a flood.

Even though I no longer have the things, I have with me the memory of the creative process, the joy of discovery, and the recognition that what I brought out in me through doing this was an ability to see potential. I could see the potential in the microscope slide, the bottle tops, the blocks and beads and fabric. The need to find a way to make a couch or table or bed or bookcase stimulated me to find resources I could use.

Part of the fun of this project was making things that would otherwise be thrown away into something useful. Today there is a word for that: “repurposing.” Little did I know that as a college student I was doing something that would become popular nearly 40 years later!

Please share your creative ideas in the comments below!